This post contains spoilers for Buffy the Vampire Slayer through the end of season six.

In honour of the first anniverary of it’s première on British television, I bring you this exclusive review and analysis of Buffy the Vampire Slayer’s all singing, all dancing musical extravaganza evil, Once More, With Feeling!

The long, long version: Before I get started on this, I should point out a couple of things that may reveal some bias: 1) I’m a big fan of musicals, always have been. 2) I’m a big fan of Buffy and had been for about 6 weeks at the time I first saw this episode.

Previously on Buffy the Vampire Slayer: Skip this if you know the show…

Buffy
She is the chosen one. Slays vampires. Yadda yadda yadda. Died (again) at the end of season 5, but was brought back from hell (they think) by Willow and the rest of the scoobies in the season 6 opener. Has serious issues.
Willow
Computer geek and now a powerful witch. Think Hermione. Has been dating Tara for the best part of two years, but at the end of the previous episode did a spell to make her forget a row they had.
Xander
The sidekick – has no particular special powers, but a nice sideline in quips. Engaged (secretly) to Anya since the end of the last season.
Giles
Buffy’s Watcher (mentor, trainer, etc) and now proprietor of the Magic Box.
Dawn
Buffy’s younger sister.
Spike
A vampire, Big Bad in season 2, popped up occasionally thereafter, and hung around full time after he got a chip implanted in him which prevents him from harming anyone. Has the mother of all crushes on Buffy.
Anya
Former vengeance demon, robbed of her powers back in season 2, became a regular some time later. Has a well-established rabbit phobia.
Tara
A less powerful witch who appeared in season 4. She and Willow are the cutest couple. Got temporarily brainwiped by seaon 5’s Big Bad.

We move straight into the main titles – but not the normal ones. Both the tune and visuals are completely redone in the style of a musical, and I believe this is the only time an episode title has been show on screen. After this comes, in the best musical tradition, the Overture – a dialog-free section that reintroduces the scene and characters and gives us a few bits of info (Buffy’s apathy, Tara finding the flower used in Willow’s spell), with music coming from the songs that will appear later. Cut to a graveyard at night, and our first song:

Going Through the Motions is in the style of the opening song from many a Disney cartoon where the heroine sings about her frustrations (c.f. Beauty and the Beast, Pocahontas). Plenty of nice moments: almost choreographed fighting, staking a vamp on ’…penetrate my heart’, the demon who doesn’t die until the end of his line, Buffy’s dismissal of the Hunk, and the final shot of Buffy through the vampire as he turns to dust. Beautiful.

The scene moves to the next day in the Magic Box, where it soon comes out that similar things have happened to the rest of the scoobies (as they all tell us at once). Which quickly brings us into I’ve Got a Theory – actually, a medley. A bit of fun as the scoobies give their ideas, including Xander’s lengthily retracted witch suggestion and Anya’s heavy metal pyrotechnic diatribe on bunnies. This then segues into What Can’t We Face – which pokes fun at the fact that our heroes routinely avert apocalypses, return from the dead, etc. Oh, and don’t forget the Jazz Hands.

Is it just us? This is the question asked by Anya – and as the door opens, we see the end of a big production number with a troop of shirt wielding dancers – They Got the Mustard Out (sung by one of the show’s producers). After this, Dawn gets back from school and surreptitiously pilfers an amulet. Willow and Tara meanwhile beg off – allegedly to get some books, but they ain’t fooling noone. They are, of course, off to the park for some flirting and singing:

Under Your Spell is a beautiful love song, and Amber Benson (Tara) has a fantastic voice. The whole song has a magical feel to it (complete with location cross-fade), and previous events give it a painful irony to go with the double meaning. Oh, and what is going on off screen at the end there – there was no subtlety in those looks… We smash cut away for a quick scene at the magic box, then the guy tap-dancing to a flaming death, which intros our smooth bad guy, Sweet. That’s Entertainment.

Next morning finds us chez Xander, where Anya and he duet on I’ll Never Tell. This is pure fun and silliness – mostly delivered to camera – with references to previous episodes, comedy newspaper titles, Anya breaking into Xander’s verse and much silly dancing. There’s also the more serious matter of the two characters insecurities and unsurities (yes, I just made that word up) as a couple which will pay off later in the season.

We next see them talking with Giles as they head down the street (with references to how TV shows are filmed in the real world). He starts to explain about the burning dancers, but we pull back for The Parking Song in which Joss Whedon has his right-hand woman singing about going commando. ROFL. Giles expresses his uncertainties about Buffy, then we cut to her entering Spike’s crypt.

He’s really not comfortable around her (what with the crush and all), so his song asks her to let him Rest In Peace. This is a nice rock number, and Spike’s lyrics clearly hit uncomfortably close to the bone for Buffy. Also features some extended nifty rhyming – and we see at the end that he’s not sure if he means what he sings.

Back at the Summers’ house, Tara is bringing Dawn up to speed on what they know about the demon, and Dawn unknowingly lets slip about the row that Willow wiped from Tara’s memory. Tara, beginning to suspect what has happened, hurries off, leaving Dawn to look through her stash of stolen loot and get off a couple of lines of her Lament before she gets kidnapped – but that’s enough to give us some more insight into her character.

Next, we are taken to the Bronze where Dawn and the Minions engage in a stylized ballet as she fails to escape from them and is deposited at the feet of Sweet, who tapdances down the steps to sing What You Feel – this is a great number, and the actor has two Tony awards for his work on broadway, so he gives a fine song and dance performance. It’s mostly plot exposition, but has some great lines. And I need one of those colour-changing zoot suits.

We now see Buffy traing with Giles – but he’s clearly unhappy that she is all too willing to let him handle things rather than dealing with them herself – he’s Standing in the Way. Tony Head is another great singer (as we’ve heard before in the show both in and out of character) and this is another great song as he expresses his concerns to a slo-mo Buffy (nifty effects there). But, of course, she didn’t hear him. During the final verse, we see Tara arrive – looking upset – to consult some books. She quickly finds out about the spell of forgetting. This brings us to a moment of genius as she and Giles reprise their respective songs and the two work together perfectly in counterpoint as the two realise that they must leave their loved ones. sniff

After the song, Spike turns up with one of the henchmen in tow. When commanded to ’Sing’, and after a dramatic intro, he promptly speaks his piece in a flat monotone. Perfect. Giles starts straight away with his new policy, convincing the scoobies to leave Buffy to face things on her own – a prospect she’s none too happy with. Hence, Walk Through the Fire – not the most cheerful of songs, but nicely constructed. Pretty much everyone gets a line or few, and there are several bits of counterpoint (complete with split-screen/merged shots) together with some reprised lines from earlier songs. Oh, and apparently those fire engines managed to hit their mark perfectly every time – impressive!

This brings us crashing (literally) into the bronze, and Life’s a Show where the purpose of the singing is revealed “and when the music starts / we open up our hearts” – because that’s exactly what the songs have been doing to the characters, causing them to express feelings that would otherwise have remained hidden. As Buffy does when she reveals that she was pulled back from Heaven (the look of pain and horror on Willow’s face is priceless – if only it weren’t to get worse). Spike is unexpectedly philosophical as he saves the day, and Dawn’s line “The hardest thing in this world is to live in it” sounds eerily familiar (Buffy said the same thing to Dawn before her sacrifice at the end of season 5 – the wheel turns, does it not).

Clearly the scoobies aren’t going to let Sweet take Dawn away (forget Buffy, you don’t want to mess with Willow when she’s angry), but it turns out that Xander is the bad boy after all (OK, weak plot twist – but there had to be one and we do get a gag out of it). Sweet gets to reprise his song as he departs – these bad guys can’t leave quietly, they just have to taunt people one last time.

All this leaves us with one last question: Where Do We Go From Here? – a song I found myself humming after many an episode that season. The line “we kinda won” pretty much sums up our heroes’ attitudes, and Spike is quick to depart – before the line “the curtains close on a kiss”. Buffy soon joins him outside as the song finishes within the bronze, and after a few last quips, we again get the counterpoint reprises. And then, they share True Love’s First Kiss (or not), complete with swelling music and final chorus of “Where Do We Go From Here?”. “THE END” is superimposed across the screen, and then yes, the curtains close. Perfection.

In addition to all that, there’s plenty of stuff going on in the background – lots of dancing of various sorts, including the Broom Dance (not quite Mary Poppins). And there are stacks of (frequently music-related gag lines) – “police were taking witness arias”, etc. The cast all turn in great performances, doing their own singing and dancing, and the cinematography is great too, using interesting camera angles and lighting which really add to the feel of the piece.

In case you haven’t already guessed, I have something of an obsession with this episode – I have the soundtrack CD and the scriptbook; the DVD is on order. It also has a lot of great associations – the first showing cheering me up on a lonely Valentine’s day, holidaying on Reunion a couple of weeks later – listening to a home-burned CD on the ’plane, or singing the songs to myself while strolling through the surf – and, more recently, the sing-a-longs with friends. And I guess that the fact that I still thoroughly enjoy watching it after getting on for 20 viewings must say something.

Phew! Final thoughts: What makes OMWF so great is that it’s not just a Musical Extravaganza – it’s the pivot around which the whole season turns. There are so many revelations both to the characters and to the audience, relationships ended and begun. I bow before the genius of Joss Whedon. Oh, and look out for the reappearance of Mustard Man in a flashback to the night before sometime in season 7. 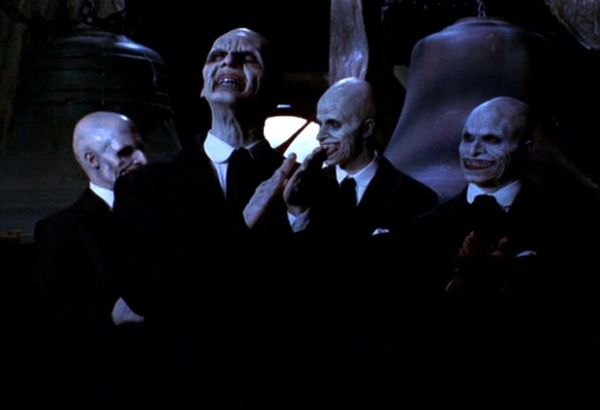 This post contains spoilers for Buffy the Vampire Slayer. “Hush” is widely regarded as one of the best upisodes of Buffy. Joss Whedon pulls all the stops out to deliver